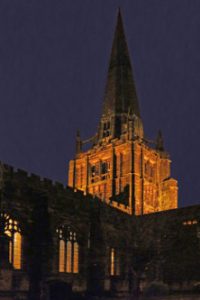 The architect was Hubert Austin, of Paley, Austin and Paley of Lancaster. It was built of Runcorn sandstone in the Gothic Revival style. Finance for the church and adjacent schools and vicarage was given by Major George Fearn J.P., a local brewer. He is buried in the cemetery on the A6 opposite the church and a miniature replica of St. George’s church tower and spire is over his grave. The land for the church and associated buildings was given by Wakefield Christie-Miller J.P. 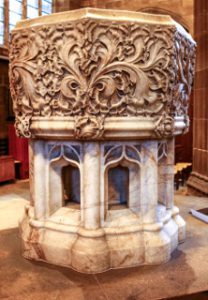 The Font stands at the west end of the church. It is made of Derbyshire alabaster, wreathed in architectural foliage and rests on a base of red Mansfield stone which has the shape of a Maltese Cross. The Font is placed near the church entrance to symbolise membership of the Church in the sacrament of Holy Baptism. 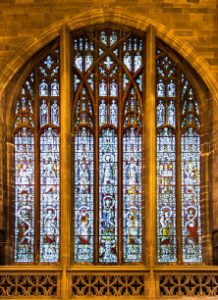 The Nave, Aisles, Organ ambulatory and Orme Chapel have a roof of carved and perforated oak.

The Chancel is paved with polished marble. The Sanctuary has steps of polished red marble.

The Choir has carved oak stalls. 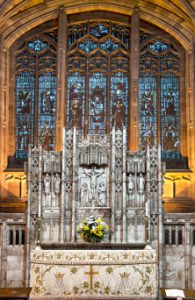 The Reredos is built of Derbyshire alabaster. The central panel is a carved crucifixion, with the Virgin Mary on one side and St. John on the other. 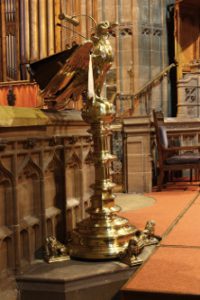 The Lectern is a brass eagle with outspread wings, resting on a massive pedestal with supporting lions. The eagle is a symbol of St. John the Evangelist carrying the Gospel message to all.

The East Window depicts St. George and the Dragon while the four panels below depict faith, fortitude, justice and charity. The seven figures at the bottom depict seven spirits before the throne. 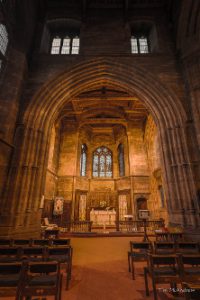 The Orme Chapel is divided from the Choir by a carved oak screen. It has an oak reredos whose central cross bears the figures of St. John the Divine and St. John the Baptist.

Originally the North Chapel, it was dedicated and renamed as the Orme Chapel by the Bishop of Chester in 1921.
The Orme family erected the Oak Screen between the choir and the Chapel in 1909 in memory of Robert Orme, whilst the Screen at the entrance was erected in 1921 in memory of Mary Orme, his widow. 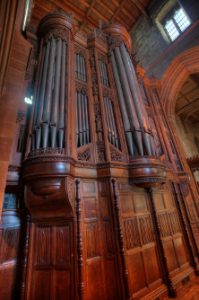 The Organ has a fine case and a figure of St. Cecilia stands on a nearby pillar. The organ is played from the console situated by the N.E. pier at whose base the foundation stone of the church can be found marked by a carved cross.

The Tower is not open to visitors other than by special prior arrangement. It houses a peal of 10 bells, in the key of D flat. The total bell weight is 6.5 tons whilst that of the Tenor bell itself is 1.5 tons. All the bells were cast and made in Whitechapel, London. Each bell carries a different inscription, e.g. No. 2 bell is inscribed ‘Glory to God in the Highest, and on Earth Peace’. 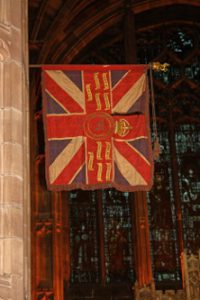 The Union Flag over the choir was of the 6th Cheshire Regiment and was laid up after the Great War when the regiment was disbanded. The Regiment’s action at St. Julien, near the Ypres Salient, is commemorated annually in St. George’s. In 1917, out of 60 officers and 1880 men, only 2 officers and 76 other ranks survived the action.

Thank you for having visited St. George’s website. We hope you have been blessed by it and hope you have been inspired to visit us in person and look forward to the possibility of your joining us in worship at one of our services.